Anyone heard of New Charleston, SC?

I’m no prophet. But…

Charleston, SC has always been a beloved city of mine. I grew up going to the beach there at my parent’s home on Isle of Palms, a barrier island just outside the city. I was married there on an old historic plantation. I have done hundreds of dollars of damage to my bank account shopping in the beautiful historic downtown. I have stared out at the ocean and the battery and dreamed up stories that stem from the sea. In fact, it was where Sirens was born. I can now hold a published novel in my hands that five years ago was only a (somewhat humorous) conversation about; what if in the future this island was under water… and what if mermaids existed?

(Apparently, they actually do, but that’s beside the point.) 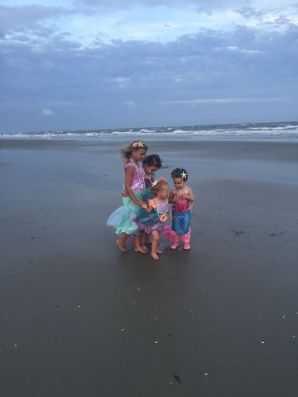 Book one of the Sirens series, Rising Tide, begins in “New Charleston” in the year 2098. The old historic city and all the barrier islands are now among the ‘drowned cities’ all around the world. They have been submerged in water from rising ocean levels and permanent hurricane season. People walking along the now manmade beaches can still see church steeples and chimney peaks jutting out of the water at low tide. New Charleston exists several miles inland where the water has yet to encroach. Here is an excerpt:

After dinner they decided to walk back on the boardwalk lining the shore. Hologram signs glowed dimly every hundred feet. When touched they brightened with historic illustrations of the old Charleston remnants that lay just offshore beneath the surface—a shopping center, a church, a farm. It always gave Lorel the shivers. But it was important. People needed to remember.

She tapped the surface of one as they walked by. The display illuminated with the image of a playground constructed on an expansive green field. The same ocean could be seen in the background, beyond a line of shrubbery and natural dunes. She tapped the small triangle on the surface and the image came to life. Several children pumped their little legs on the swings, a few stepped dizzily from a merry-go-round. A boy and girl held hands and glided down a double slide, their faces filled with the simple joy of a day at the park. Mothers lined the benches on the perimeter holding babies or rifling through stroller bags.

“There would never be space for such a park now. In fact, I don’t think I’ve ever seen that many children playing together before in one place.” She turned to Jake. “Where do children play?”

The setting, half of which takes place in New Charleston, is a major character in the story. So seeing the news these last few days felt uncanny to me. So similar to a world I predicted happening in my book. Don’t get me wrong… I don’t think we are really headed to a submerged Charleston, SC. And I definitely would never want to see that happen. But I found it fascinating, and terrifying, to see even a hint of a world that could turn into reality.

Someone kayaking in the Market… what?!?

And the reality now is just sad. People are dying from the flood conditions. SC has had more rain than they have in 1000 years! They got two feet in just 4 days. People are trapped in their homes, many may be left homeless. Obama has declared it a state of emergency. I wish all of these people the best, and hope that the city of Charleston, along with Columbia and others, doesn’t undergo too much damage. Here is a video with some amazing footage of the flooding. I recognize a few of the sites.

I am just beginning my third book in the Sirens series. The working title is The Drowned Cities. But like I said, I’m no prophet.